President highlights need for citizens to identify ‘illusory rhetoric’ after recent events. President Michael D Higgins and his wife Sabina hosted a reception in Aras an Uachtarain for Philosophy Ireland on Saturday. 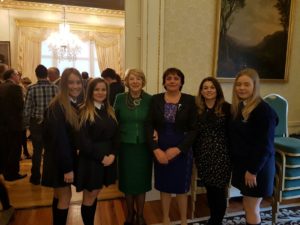 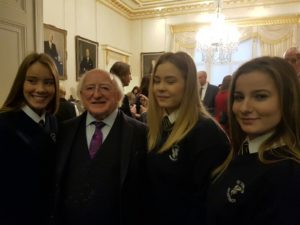 Students and teachers from St. Dominic’s Ballyfermot had the privilege of attending a prestigious event in Áras an Uachtaráin on Saturday the 19th of November. The function at Áras an Uachtaráin was to mark World Philosophy Day, which fell on the 17thof November. The event on Saturday included a reception for Philosophy Ireland, an organisation working to promote philosophy in schools and society.Sabina Higgins is a patron of the organisation.

Deborah Quigley is a member of Philosophy Ireland, a Philosophy graduate and a teacher of Philosophy in St. Dominic’s College Ballyfermot. Deborah recalls how she approached the principal of the school Mrs. Mary Daly two years ago, and asked if she could pilot a Transition Year Philosophy module in the school. Thankfully Mrs. Daly could see the value and importance of teaching philosophy at second level, and today it is a very popular subject in the school. Mary Daly who addressed the gathering in Arás an Uachtáráin stated ‘that our young people live in a complex society in which they are bombarded by social media and we need to teach  them to be critical thinkers, to have great ethical awareness and greater powers of reflection and ultimately a greater understanding of life’

President Michael D Higgins said “The teaching of philosophy is one of the most powerful tools we have at our disposal to empower children into acting as free and responsible subjects in an ever more complex, interconnected and uncertain world,” Mr. Higgins also asserted that “It is so important, too, that they learn to articulate their thoughts and provide justifications for them, and that they find ways of disagreeing without resorting to violence, whether verbal or physical.”

Alexandra Medzihradska,  a 5th year student at St. Dominic’s College said “I am delighted that my school has given the opportunity to study philosophy,  Philosophy allows us to think for ourselves, and to come to our own assumptions about life, rather than conforming and simply agreeing with what is popularised. We get the chance to be heard, to think about the big questions in life; like what is happiness? What is truth?  Does democracy work? etc. I hope to go on and study Philosophy at University”.

Hollie Baker, another 5th year student said “I have learned how to formulate my opinions. I have gained skills of critical analysis and how to disagree without conflict. Studying Philosophy has broadened my world view and I have grown in confidence”.

Megan Hanney said “I was delighted to be invited to Áras an Uachtaráin with my Philosophy teacher Ms. Quigley, it was an amazing experience. The room was filled with people who were all so passionate about teaching philosophy in Irish schools. President Higgins gave an incredible speech, I am really inspired by the event. It was a great honour to meet with President Higgins and his wife Sabina Higgins it was a once in a life time opportunity.”