Home/Featured/Uncategorized/Rith 2016: Our TY students joined more than 50,000 run for Irish language as part of Rising commemoration.
Previous Next 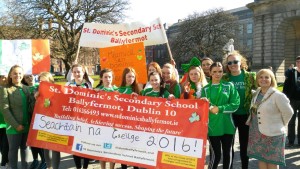 Rith 2016 finished at Trinity College in Dublin yesterday, with the national event having visited every county over the previous 11 days. As part of the race, runners passed along a baton which contained a message from President Michael D Higgins.

“Is fearr rith maith ná drochsheasamh – they say it is better to run away well than to stay and make a bad stand,” the President said in a statement yesterday.

“As [Rith 2016] draws to a close here, the fine people who have taken part in this feat have not only run well, but they have done a thoroughly excellent job. And it is most fitting that they should come to the finish line here in Dublin, a place where a brave and courageous stand was taken 100 years ago.

“It was ever the intention that the Irish language would play a part in the country’s health – in its mental health and in its healthy outlook in the first instance – but also in a wellbeing that would benefit the public as a whole in every way.